"Mom, how come we never get to eat meat?"said Satyabrata. His mother replied, "I can barely afford to feed you vegetables, how am I supposed to get meat?"

Satyabrata took matters into his own hands. He went out and killed a goose to eat.

Later, the King's army came looking for the missing goose. Angered, the King had Satyabrata arrested.

Satyabrata wondered what food they would serve him in prison. Goose, chicken, maybe lamb? He thought prison might not be too bad after all. The prison food was not that bad after all. 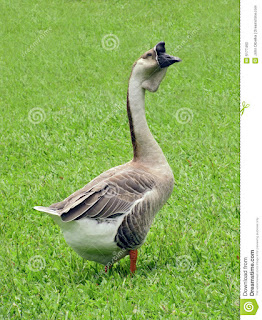 Author's Note - I based this story on the Sacred Tales of India story titled "The Gander Eater" where Satyabrata desires meat but his widowed mother cannot afford it. He goes out and kills a gander, or a goose, and the King comes looking for him. In the story he is imprisoned and eventually is freed by his mothers prayers to the goddess Subachami. He is freed from prison and is then married to the king's daughter to live a life of wealth. In my story, since I only had 100 words, I changed it to where Satyabrata was happy in prison because they fed him meat, something he always wanted. I also thought to have him stay in prison because he was unhappy with his mother for being unable to afford meat.

In the story, there is a Brahman who is unable to dig a pond however hard he tries. He digs but water is never found. He is told in his dream that the only way to acquire water is to cut his grandson in five pieces in a sacrifice to the water god Varuna, then place him in all four corners and in the middle. The Brahman does not want to do this, but eventually tells his grandson who agrees, as he will do anything for his grandfather. The boy is cut and then water appears. The boys mother later is bathing in the water, but has not seen her son all day. She wonders where he is. The goddess of Sashthi appears while the mother is praying and worshipping her, because it is a holy day. Sashthi sees this and decides to give her son back to the mother. The son returns and the grandfather is struck by surprise and is in awe about how he was brought back to life. 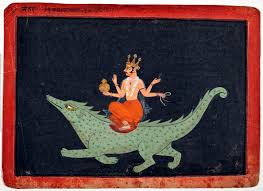 In this story, Satyabrata discovers that his friends all eat meat while he only is served vegetables at home, because his mom is a poor widow. He desires meat, so he takes matters into his own hands and kills a Gander. Satyabrata and his mom eat the Gander together but the next morning, people of the king come looking for the missing bird and find them and the fate of the bird. They imprison Satyabrata and his mother, going insane, makes a prayer to the goddess Subachani. She asks Subachani to free her son from prison and to make him rich. The goddess goes to the king and orders him to marry his daughter to Satyabrata and to release him from prison. Satyabrata marries the king's daughter, and is now the heir of the kingdom. 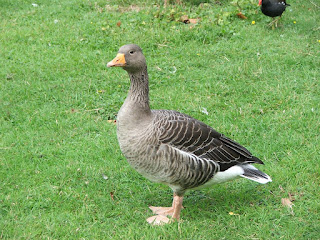 My favorite piece of advice that I read through the list was that of Kevin Barry titled "Literary Talent Isn't Rare." In his post, he talks about how nearly everyone is able to write creative stories with good characters and descriptions, but what people lack is the discipline to do so. I truly do agree with what he said and it gave me a new sense of motivation to write stories. My whole life I have thought of myself as the least creative person when it came to writing. I would avoid every personal narrative class I could, solely because I was not good at coming up with ideas to write about, especially if they were fictional. After taking this course and now reading this quote by Kevin Barry, it has solidified in my mind that anyone is capable of being a great writer, not only that, anyone is capable of being great at ANYTHING as long as they practice discipline. I think that discipline and hard work can get you anywhere you want to be, but often times people's emotions get in their way and distract them from making disciplined decisions. 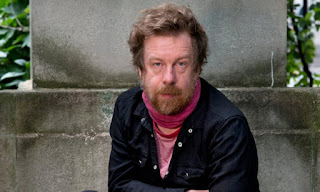 The story is similar to the version that I previously watched in the Epified version. The story of Kangsa is that he was supposed to be killed by his own offspring, so every time he had a child he would have the baby killed. One night, his baby and a "baby" that Vishnu disguised himself as. Vishnu was helped across a sea through the assistance of a snake, who sheltered him from rain and the water of the sea. When Kangsa came to kill the baby Vishnu, Vishnu rose as the god he is and killed Kangsa, just as his death was predicted. 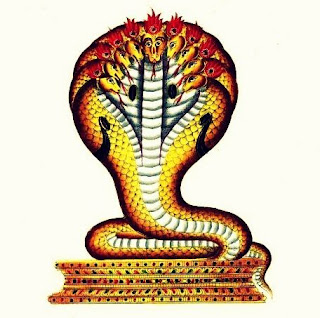 Bibliography - The Slayer of Kanga

Savitri who is the daughter of a king falls in love with a man named Satyaban, who is the son of a hermit. Savitri's father wants her to marry a man to continue the offspring, so he holds a council for her to find a husband. She denies and tells her father that she is in love with Satyaban, a man who is of lower class in the caste system. The two get married but one day in the forest Satyaban is cursed and dies in Savitri's lap. She brings Satyaban back from the dead by being granted three boons by Yama, the king of the dead. She does not leave her husbands side so Yama grants her boons. In her final boon, Savitri asked Yama to grant her a hundred sons by Satyaban, each spread out by 100 years. Yama unaware of the complexity of this wish agrees, then later realizes that he must now bring Satyaban back to life. They live happily ever after together. 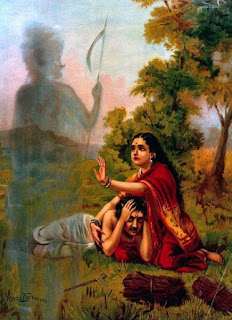 Savitri and Satyaban, accompanied by Yama

Kamsa the widely hated king woke from his slumber to a voice calling him from the sky. It was a voice he did not recognize, but he could tell it was holy.

The voice called out, "The eighth son of Devaki will bring upon your demise. Tread lightly."

The son was Krishna.

Kamsa at once commanded his army to imprison his cousin Devaki, monitoring each birth closely. The King slept in fear that one day a baby would be the one to dethrone him. He was so worried that he fled the town and resigned as king, in the end he did not want to bring pain upon his cousin by killing her child. He was a misunderstood king, one who had compassion for others. 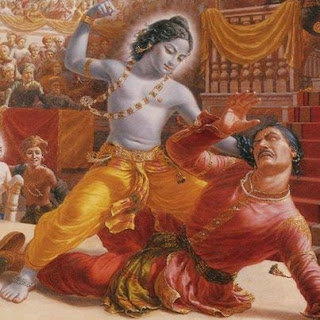 Kamsa being attacked by Krishna
Bibliography - Krishna Epified
Author's Note: I did a small microfiction and retold the story of Kamsa finding out that his nephew would be the one to kill him. In the original story, when Devaki gets married, a voice from the sky tells Kamsa that her eighth son would be the one to kill him. This leads Kamsa to imprison his cousin and have guards monitor each of her births. He kills all of Devaki's children as he does not want to take any chances at being killed. The eighth son however, gets away. Kamsa is also perceived as a bad King and everyone wants to get rid of him. In my story, I portray Kamsa as a misunderstood and compassionate King, who does not want to harm his cousin by killing her son. He instead escapes into the forest for hiding.

Satyabrata's Pleasure   "Mom, how come we never get to eat meat?"said Satyabrata. His mother replied, "I can barely affor...